The way in to a lot of stories for most people, is a love story. It’s really universal. I knew I wanted to touch on important themes – the different ways they approached work, what kind of work comedy is, and what they did as pioneers for television. But we succeed and fail based on how much we care about their love story

My wife is the I Love Lucy fan in our house. I’ve seen the show and I enjoy it, but she has fond memories of watching certain episodes in reruns and is not against quoting an episode here or there. The only piece of trivia that I knew about Lucille Ball and Desi Arnaz was that Desilu Productions is the reason we have Star Trek. So, even though I thought that a documentary on Lucy and Desi wasn’t going to be my cup of tea, I knew that I had to review it for my wife. I have to say that I’m really glad that I’m a self-proclaimed good husband as the documentary ended up being incredible.

Lucy and Desi gives us an in-depth look at the lives of Lucy and Desi from their childhoods until death. We get look behind the curtain and gain an understanding of the people who, quite literally, changed television. Whether you’re a fan of I Love Lucy, the people behind the characters, the history of television, or just a good old fashion love story – Lucy and Desi has something to offer for everyone.

It wasn’t until I got older, and doing comedy myself, that I really understood what they were doing, and was able to see the many layers to their genius. I’m inspired by the big swings that the two of them took. They came to their success with a lot of confidence. And, because of that, they said ‘No’ to a lot of things. They took giant leaps. They left their homes and worked really hard, and just kept gambling. And they didn’t play small. They were very, very brave.

The film will have you in tears – both from laughing and crying – as it tells the story of two people who knew what they wanted and worked incredibly hard to make it happen. It’s hard to say what exactly this documentary is. Is it a love story? Is it a story of finding the American dream? Is it the history of television? It’s all of those things and so much more. You can see and feel the love as you watch those old videos and listen to the recorded voices. Similarly, you can experience the tension and pain. You hear Desi speak on the importance of moderation and see the exhaustion on Lucy’s face as she runs Desilu Productions.

While the film is filled with insight from celebrities like Carol Burnett, Bette Midler, and Norman Lear and stories from Lucy and Desi’s children, the real commentary comes from Cuban-American playwright Eduardo Machado. He speaks to the importance of seeing Desi on screen and the difference between an immigrant and a refuge and how that difference drove Desi. It was fascinating to hear his thoughts and he added an additional dimension to the film that I just wasn’t expecting.

As I said, you will find yourself laughing and crying as you watch the film. The laughter comes from so many clips, mostly of I Love Lucy, the tears, however, are the more surprising part. The film is filled with touching moments. Moments that will make your eyes leak – you will tear up without knowing why, but you can feel the emotion. The end, however, is where the tears flow. Those final moments are absolutely beautiful – sad, but beautiful. It’s hard to describe just how incredibly Amy Poehler brought the entire film together.

Check out Lucy and Desi on Prime Video on Friday, March 4. 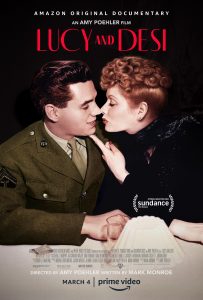 Movie description: From director Amy Poehler, Lucy and Desi explores the unlikely partnership and enduring legacy of one of the most prolific power couples in entertainment history. Lucille Ball and Desi Arnaz risked everything to be together. Their love for each other led to the most influential show in the history of television, I Love Lucy. Desi – an immigrant from Cuba who lost everything in exile, became a band leader, and eventually a brilliant producer and technical pioneer. Lucille came from nothing and, with an unrivaled work ethic, built a career as a model, chorus girl and eventually as an actor in the studio system. She found her calling in comedy, first in radio. When Lucille was finally granted the opportunity to have her own television show, she insisted that her real-life spouse, Desi, be cast as her husband. Defying the odds, they re-invented the medium, on the screen and behind the cameras. The foundation of I Love Lucy was the constant rupture and repair of unconditional love. What Lucy and Desi couldn’t make work with each other, they gave to the rest of the world. Lucy and Desi is an insightful and intimate peek behind the curtain of these two remarkable trailblazers – featuring interviews with Lucie Arnaz Luckinbill, Norman Lear, Desi Arnaz Jr, Carol Burnett and Bette Midler.