While Hallmark Channel’s Love, Of Course premiered in the US on October 20th, in Canada, we had to wait an extra week to see the film. Since I was involved in a 24-hour charity fundraiser as it was airing, I had to wait until today to finally see the movie. It was worth the wait.

Love, Of Course is the story of a widow, Amy (Kelly Rutherford) who throws all of her free time after the passing of her husband into being overly involved in the life of her daughter, Cara (Makenzie Vega). The relationship, however, appears healthy and unstrained by the clinginess that is evident. Amy drives Cara to university and, while helping her daughter move in, encounters Noah (Cameron Mathison), who appears to be a gardener, but, in a classic Hallmark Channel misdirect, ends up being a professor. Amy ends up taking a job (temporarily) at the University as an events planner, working closely with Noah on the Harvest Festival . From there, we get our standard Hallmark Channel movie, which was very well done and shouldn’t be spoiled.

The movie was directed by Lee Friedlander, who has directed multiple Hallmark Channel films and is, therefore, familiar with the classic Hallmark Channel framework. I was, however, very disappointed by a sequence of events that ripped me out of the movie. I am able to completely suspend my disbelief in order to fully enjoy a romcom, that perfect storm of happenstance that brings together the most magical moment you can imagine. If you’re a hopeless romantic, it brings a smile to your face and this movie kept me smiling for quite a while. However, either the prop department or post production made a mistake. During one scene, Amy and Noah are walking around town putting up posters for the Harvest Festival. The posters call attention to a few activities that are planned including a Barn Dance and a Corn Maze, both of which are listed in very large print. Unfortunately, several scenes later, Amy suggests a Corn Maze to Noah and the fight over the possibility of setting one up. Later, in a grand gesture Noah builds the corn maze… unfortunately, due to the screw up with the scene sequence (or the poster design), you already know the corn maze is coming. While I’m willing to suspend disbelief, I cannot forget about the logical progression of time.

One minor point that caught me off guard was a scene where Amy and Cara stopped for gas on their way to the school. The camera flies over an older car with a very clear ‘For Sale’ sign and lingers for a few seconds longer than I would have expected. This made me think that later on in the film, we’d see Amy or Cara in that car, but it didn’t happen. This is the first that that I can remember, where I expected a Hallmark Channel movie to be foreshadowing a future scene, only to be wrong. I’m left wondering if there’s a deleted scene that does involve that car.

At the end of the film, you are left with that perfect Hallmark Channel ending and just a little bit of dust in your eyes. The film ends with a kiss between Noah and Amy, their first of the film and a perfect throwback to a scene in the middle of the movie where they nearly kiss but don’t. I thought that was a cute twist that allowed that single kiss to mean so much more and demonstrate just how much emotion existed. It was a fitting end to the film. 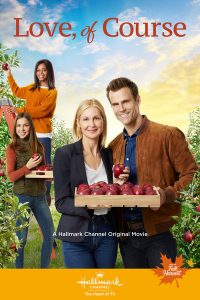 Movie description: Amy is helping her daughter Cara settle into college and while visiting friends lands a job to help with the annual Fall Harvest Festival. When Amy meets Noah, a charismatic, well-traveled professor, she learns more about herself and discovers a new life of her own, filled with romance.