I am a fan of bad movies. My wife will often walk out of the room, shaking her head and asking how I can watch such trash. I am both proud and ashamed to say that I finished Jurassic Galaxy. The new Jurassic Park movies have proven that dinosaurs continue to be popular and Star Wars has proven we’re still interested in space, so someone had the brilliant idea to merge the two and give us Jurassic Galaxy. If you’re hoping for a universe-wide theme park, you’ll be disappointed. Similarly, if you’re expecting dinosaurs to be fighting across a galaxy, you’ve come to the wrong place. Instead, we get a barren planet filled with dinosaurs and survivors from a crashed spaceship trying to survive. So let’s take a moment to talk about the worst film I’ve ever seen, one where ‘it’s so bad, it’s good’ doesn’t hold true.

The film was probably filmed on an iPhone as the production quality is awful. The special effects make me think that they were a high school class project. I’ve seen better costumes from cosplayers at cons than the “spacesuits” the cast initially wore and the floating computer (a rip off of the ghost from Destiny) was so bad that it actually had me laughing. All in all, the quality was pretty atrocious. It had a feel like it was a small theatre troupe that just wanted to put together a film to say they had starred in a feature film. I will say that the fight scenes were amusing. I loved watching them hit nothing, as the dinosaurs were, of course, added via CGI and they didn’t always line up with where the cast was striking. This meant that the placement of the attacks on the CGI’d dinos was quite humorous at times. Additionally, when one character is attacked by a dinosaur, the claws don’t even come close to hitting him and he doesn’t even appear to be cut, until a bloody hand is shown later, which somehow leads to his death.

My favourite character, by far, was Harris, played by Doug Burch. He had a different accent every time he spoke. I’m not sure if this was on purpose or if they thought he always sounded the same but there was quite the distinction during several of his scenes. There were two actors that weren’t awful in the film. Madison West as Daize did a decent job and Jonathan Nation as Flynn actually portrayed a believable character that felt at least partially developed, I would say he’s probably the standout star of the film.

I don’t want to discourage anyone from checking out this film. I spent 99 cents to see this and I know I got more than a dollars’ worth of laughter out of it. The problem is that it isn’t a comedy. That said, if you enjoy low production quality and lower than low budget films, you might actually enjoy this. The story was relatively decent, other than Retch and the story line surrounding him. There are some definitely some production mistakes however, like the graffiti on all of the fallen trees the encounter and the “road” they are walking. Why does a planet of dinosaurs have a pretty clear gravel road? You may have also noticed that I rated this as a Cry Factor of 1-star, which I also did in the Giggles and Grins category. I feel like my laughter at how bad the movie was brought me to tears more often than not.

I will say that I’m looking forward to Hornet from the same production company, I watched the trailer and it looked just as bad. It also had a lot of the same cast members, which reinforces my thought process that they’re a small theatre troupe getting together to create films.

I don’t think the creators of this film ever imagined they were creating an Oscar winning film, I suspect they realize what they made and that redeems them slightly. It’s why I moved this from 0.5 stars to 1 star. If you’re looking for something really bad, so bad you can’t believe it’s a real movie, then check this film out. It could entertain you for 75 minutes as long as you don’t take it seriously. 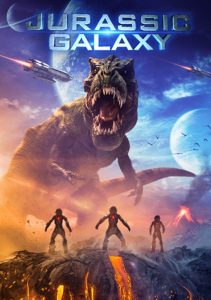 Movie description: In the near future, a ship of space explorers travel through a distant solar system and crash land on an unknown, mysterious planet. They’re soon met with some of their worst fears as they discover the planet is inhabited by monstrous dinosaurs. Now, using only their wits and their will to survive, these astronauts must venture across the dangerous landscape and fight off the terrible monsters to find their broken ship if they ever hope to leave the planet alive.

I’ll preface this review by saying this is not my type of movie and I’m not sure I understand the vision that they had, so let’s talk about what was going on because I had […]