It has been a long time since I’ve seen good pure science fiction. I’ve seen awesome Sci-Fi mixed with romance or comedy. I’ve seen Sci-Fi with a dramatic twist that blew my mind. I haven’t seen Sci-Fi that reminded me of books like Elizabeth Moon’s Vatta’s War series or David Weber’s Honorverse in a while. Films that hark back to the likes of Starship Troopers and Independence Day. That’s what Skylines did for me – it was good old-fashioned Sci-Fi fun. I really enjoyed the movie and, here’s the rub, I didn’t realize it was the third film in a trilogy initially. I almost stopped the movie to go back and watch the first two films, but I was enjoying it so much I wanted to finish the ride. I highly recommend that, if you’re going to watch this series, you watch Skyline (2010) and Beyond Skyline (2017) first. It will be weird to watch it in reverse, but I definitely intend to watch the other two films now.

They made another Skyline movie!?” It’s legitimately crazy, I know. It’s even hard for me to believe we’ve made it this far in the ten years since Skyline was released. Though the independent invasion thriller was an unlikely success story at the global box office, some of the critical reactions were so negative at the time, I wasn’t sure I’d have a career a decade later, let alone a third entry in the franchise.

I’m going to setup the backstory for the film, which may include mild spoilers for the previous films – reader beware. Jump past the spoiler tag if you don’t want the backstory and just want a spoiler-free review of the current film.

Spoiler
In Skyline, Earth is invaded by blue-eyed aliens who abduct people. The abductees brains are removed by tubes and inserted into alien bodies. A couple is abducted and, while the husband’s brain is harvested, the wife is left alone because she is pregnant. The husband’s brain, in an alien body, somehow remains in control of his humanity and, ultimately, saves his wife and unborn child.

In Beyond Skyline, the film starts at the same point as Skyline, following a different group. There’s an eventual convergence between the groups and the story progresses. It is revealed that the unborn child is a hybrid with some alien abilities and she’s able to turn more of the blue eyed aliens to red eyes, helping them regain their humanity. Within 10 years, the child becomes an adult due to a twist that has her rapidly age. She leads an attack against the alien invaders to defend Earth. This is where the initial scenes of Skylines begin.

As I mentioned, Skylines is just good Sci-Fi. I think I’d also call it classic Sci-Fi. So many things are now in the realm of science fiction, but when I think of Sci-Fi, I tend to think of aliens and spaceships… so I’ll use the term classic. In this film, we have spaceships, aliens, and cool weapons… all those classic elements. It also looks good. There have been a lot of sci-fi films lately that are very low budget and you can tell that. This film is a little more “Hollywood-esque.” I don’t think this was a massive blockbuster in terms of production cost (it may have been), but the effects are good, the acting is awesome, and it looks and feels like a big budget film. It gave me everything I wanted and so much more than I was expecting.

The bulk of the movie takes place years after Beyond Skyline, with Rose in hiding and a strange virus that is turning the red-eyed aliens that retain their humanity back into blue-eyed killers. Rose is eventually captured and told that they have a plan to save the world, but it involves traveling to the alien home world, Cobalt 1. The sets for Cobalt 1 are beautiful and it feels like you’re on a cold, barren alien planet as they travel across the terrain on a mission that will hopefully save humanity.

There’s honestly nothing I love more than an old-fashioned space adventure where a rough and tumble team of badasses head to a hostile alien planet inhabited with vicious, hideous creatures lurking in every shadow. The challenge became: how could we make a film in the tradition of our favorites like Aliens, Starship Troopers, and Pitch Black while embarking on a new journey of self-discovery for our super powered hero, Rose.

Our hero, Rose, is played by Lindsey Morgan (Raven Reyes on The 100) and she is brilliant in the role. Her growth across the film from a scared woman on the run, unsure of her past actions and powers to a genuine space fighting badass with super powers is amazing to see on screen. She portrays both sides with a talent I simply didn’t expect. I’m not sure why, but in my head I have non-Arrowverse CW stars as a step above soap opera stars and that’s Morgan’s background. I have seen amazing performances out of CW stars in the past and I think I need to disconnect the storytelling from the acting because clearly there’s amazing acting talent hidden in those shows.

Morgan is supported by an amazing cast that features some of my favourite actors including Rhona Mitra, who I loved in The Last Ship, and Alexander Siddig, who, for me, will always be Bashir on ST:DS9 even though he has had many popular roles. The cast also included a number of awesome martial artists – Daniel Bernhardt, Cha-Lee Yoon, and Yayan Ruhian – who gave us some incredible fight scenes that greatly added to the film. It’s the type of cast where you may not immediately know the names, but, as soon as you see them on screen, you recognize them from a number of beloved films.

Despite all the hardships of finishing a film about an alien pandemic, in the middle of an actual pandemic, it’s been an absolute pleasure to bring this story to life. I hope you all enjoy your trip to Cobalt 1 and, who knows? Maybe there will be even more unlikely adventures in our future.

If you’re a classic Sci-Fi fan, then I highly recommend checking out Skylines and, most likely, the first two films in the trilogy.

Skylines was released in select Theaters, Drive-ins, and on Demand and Digital on December 18. 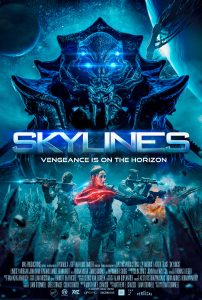 Movie description: Several years after aliens invaded Earth, former killer extraterrestrials have had their biology altered so they can peacefully coexist with humans. When a lethal virus emerges, the aliens start to revert to their unstoppable, human-hunting form. To save Earth, superpowered hybrid Captain Rose Corley (Lindsey Morgan) must lead a team of elite soldiers on a deadly mission beyond the far reaches of space to the aliens’ planet.