Have you ever thought to yourself, “Hey, I bet Tusk is the oddest film that Justin Long will ever star in?” If you have, then you might want to sit down because House of Darkness is just plain strange. Not in the same way as Tusk mind you, because I would sit down and watch Tusk again, I’m not sure I would give House of Darkness a second watch. When the film ended, I still wasn’t sure what I had watched or why I had watched it. If you’re wondering why I gave the film 3-stars, which is closer to 5-stars than no stars, I’m not really sure. I honestly don’t know if the film was genius at times or simply a glimpse inside the mind of an insane man. If you wonder why I immediately started with mentioning Tusk, it is because I was greatly disappointed to see that Long’s biography in the production notes mentioned 31 titles and Tusk was not among them. Anyway, let’s get back to House of Darkness.

House of Darkness kicks off like many movies I dislike, which may be why I wasn’t expecting much right off the bat. It was unfortunate because I’m a big Justin Long fan and Kate Bosworth has been in a number of decent films, so I went in with high expectations. However, the opening scene does something that writers and directors seem to love, something that should be banned from ever happening, they drop us into the film already in progress.

Why make this movie and why make it now? Always a good set of questions and always worth answering and so here’s what I think about it: fairy tales are always useful, they are always ‘in’ and, since childhood, have taught most of us some of the biggest lessons that we’ve learned in life. It’s not for nothing that this film starts with “once upon a time” and so does our promotional poster: through the filter of a fable I am able to tackle issues that might otherwise feel heavy or precious if presented in another context.

We meet Hap Jackson (Long) and Mina Murray (Bosworth) in the car as they pull up to Mina’s home. The how and why are not included in the scene, but if you watch the movie (or read the synopsis), you’ll know that Hap picked up Mina at the bar and is driving her home. An extra 60-seconds to include a bar scene with Hap approaching Mina and a short time jump forward to them with several empty bottles on the table, getting up to leave, would have very easily set up the story and given us a clean entry point. Also, writer/director Neil LaBute points out in the quote above that this was his fable and they always seem to have concrete beginnings.

Before we go any further, consider this a warning. I try not to give spoilers, but I do fully breakdown the film in the following paragraphs. If you’re intrigued at this point, I recommend watching the film and seeing if your intrigue pays off. Otherwise, read on… you may know what is coming in the film should you decide to watch it, but you’ll be better informed when you make the ‘to watch or not to watch’ decision.

This is where we get to the point, where I don’t know if I love or hate the film. It has a running time of 89 minutes and is broken into 3 parts. They aren’t evenly split at 30-minutes each, but rather divided into roughly 35 minutes, 40 minutes, and 14 minutes. In the first part of the film, we have two cast members – Long and Bosworth – engaged in suggestive (and I’m not sure that’s the right word) conversation. It is a mix of awkward flirtation, inappropriate comments, and the occasional distraction. The dialogue makes me want to cringe and the performances are painful, but I honestly couldn’t tell if that was intentional or accidental. Around the 35 minute mark, we meet Lucy (Gia Crovatin) and things become more awkward. Hal thinks that he’s lucked out and will end up in a threesome, but there’s a few weird things happening. Nothing that implies “thriller” to me, but things start to get interesting.

And I hope the results are there on the screen: a tight little story that dabbles with some of my favorite issues, pitting men and women against one other in a war of words while slowly creating an ominous mood and generating a healthy amount of palpable tension. Thanks to a crack quartet of excellent actors—some of who were new to me and others whom I had worked with previously—I was able to capture four excellent performances on film and create something that is indeed a film but carries in it a touch of theatricality that acknowledges my roots on the stage.

Around an hour into the film, we come to the end of what I feel is LaBute’s “war of words”, but there’s a problem, the palpable tension that he mentions doesn’t exist. Instead, it feels awkward. Long shifts between macho, male asshole and nerdy fish out of water. I get the sense that the character is supposed to be a chauvinist, but Long is too nice of a guy to play that role and he doesn’t have the physicality to make it reality. I think Long is a fantastic actor, I’m just not sure that this was the role for him.

At this point, Mina and Lucy ask Hap to tell them a ghost story. Instead, he explains his fantasy for how the night ends. Disappointed that they didn’t get a ghost story, they tell their own. It is a story of rape, abuse, torture, and, ultimately, death. A story that, for the first time, creates tension in the film as Hap is visible distressed and freaked out. It is also where we get our only jump scare, the introduction of the final cast member, Lucy Walters as Nora, and the final part of the film, where we learn that the 3 women are vampires and Hap is their next meal.

I suppose you could also say the film is split into 3 parts of roughly 30 minutes – awkward setup with two people, awkward conversation with three people, actual thriller. That’s why I’m so torn with this film. The final 30 minutes are interesting and intriguing, but they are so disconnected from the first hour, that I’m not sure it was worth the wait to get to that point. Then again, all four actors are incredible in the final 30 minutes of the movie and all of the awkwardness of the first 60 minutes just fades away.

If you read the spoiler, you understand why my review is all over the place. If you didn’t… know that I enjoyed the end of the film, but I’m still not sure it was worth the ride to get to that point. This is one where you might just have to decide for yourself. If you can handle an hour of awkwardness for 30 minutes of payoff, I’d recommend watching it. If you’re a fan of any of the cast members, you should check it out. If you’re bored and out of options, this is better than a lot of other things that you could watch. However, it wasn’t a great thriller and the first 60 minutes really didn’t set the stage for the conclusion. In fact, you may enjoy the move more if you skip the first 62 minutes and watch the last 27 as a short. Just a thought. 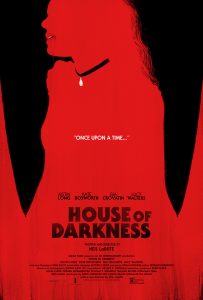 Movie description: Justin Long and Kate Bosworth star in this seductive thriller from director Neil LaBute (The Wicker Man). Driving home to her secluded estate after meeting at a local bar, a player out to score thinks his beautiful, mysterious date will be another casual hook-up. While getting acquainted, their flirtation turns playful, sexy and sinister. Hoping to get lucky, his luck may have just run out.

When my wife and I watched the trailer for this film, we both immediately said the same thing, it looks like an R-rated version of Home Alone. My wife decided she didn’t want to watch it, […]