I used to say that I hated documentaries and, lately, I’ve seen a lot of really good documentaries. I was really thinking that I was becoming a fan of the genre, then I watched All Light, Everywhere. It turns out that documentaries are like every other film, there are good ones and bad ones. All Light, Everywhere is a bad one. I’ll be up front with this review – I don’t recommend watching this film. That’s a real shame, because I think the topic is really interesting… I just don’t think the director had a clue when it came to putting together a compelling film.

The film has a runtime of 109 minutes. I didn’t run a stop watch, but I’d be willing to venture that 40+ minutes of that are tied to nothingness. Instead of simply conveying information or telling a story, director Theo Anthony weaves together multiple stories, interspersing them with cuts that have nothing to do with the topics in the film. If you want to watch a spinning yellow screen or footage of an experiment that has electrodes connected to test subjects that is never explained, then this might just be the film for you.

The film had three really interesting concepts that could have been used to tell an incredible story. A look at Persistent Surveillance Systems – the company that used planes to secretly spy on the residents of Baltimore. A very in-depth look at Axon, the makers of Tasers and Body Cameras. A very interesting look at the history of photography and recorded images. Had the film stuck to just this material, it would have been a really interesting documentary and those aspects are interesting, which is why it gets 2.5-stars. Unfortunately, that’s only about an hours worth of footage and you need to sit through the remaining 49 minutes.

I think the issue is that Anthony really wasn’t sure if he was making a documentary or an art film and he attempted to create both. It didn’t work. Instead of what could have been one of the best deep dives into police surveillance around, we got a film that couldn’t maintain focus. If you’ve ever brought a puppy to a friend’s home and watched as they run around crazily and without reason exploring everything, sometimes revisiting the same point multiple times, then you know what to expect from this film.

The other negative to this film was the decision to use a mixture of subtitles and narration. Sometimes they say the same thing, sometimes they say something different. One method of communicating with the audience beyond the visuals would have been sufficient. On top of that, the narration showed a real bias, a bias that wasn’t necessary because you could draw the same conclusion just by watching the information. It shows how little the director thinks of his audience that he felt the need to force feed conclusions on the viewer.

Finally, the film has an epilogue that has nothing to do with the rest of the film… a film that is, in my opinion unfinished. The epilogue shows you students filming a TV pilot… it has no tie in and no relationship to the rest of the content. So, you get a film without any sort of closure, then an epilogue where you expect closure, and instead you just get something that is completely unrelated.

At the end of the day, this documentary has so much possibility and instead it is a hot mess. If you do want to see some interesting footage of the Axon facility, then you may want to watch this movie, but I expect most people will want to avoid it.

All Light, Everywhere will be released in theatres on June 4. 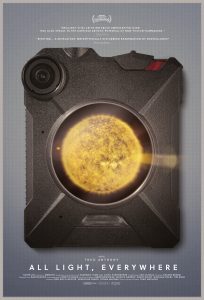 Movie description: ALL LIGHT, EVERYWHERE is an exploration of the shared histories of cameras, weapons, policing and justice. As surveillance technologies become a fixture in everyday life, the film interrogates the complexity of an objective point of view, probing the biases inherent in both human perception and the lens.