Mr. Jones is a long, slow film… not MCU long, but long none-the-less. The film, advertised as a biopic, tells the story of Gareth Jones, a Welsh journalist that broke the news of Holodomor and the Soviet Union famine of 1932-1933. The setup of the story takes a very long time, moves very slowly, and I almost turned the film off. I’m fine with something taking a while as long as it is fast paced or getting to the point quickly with a slower pace, but taking a while and moving at a slow pace is painful to watch. That was the biggest downside to this film, but my wife, who views the movies with me and reviews these write-ups, disagreed with me; she felt the pacing was fine. The other downside was the tie in to Animal Farm and George Orwell. As far as I can tell from my research, Orwell once said he was aware of Jones, but there’s no evidence that the two ever met or that Jones was an inspiration for the book as the film suggests. I realize the film also tags itself as a drama, but I prefer minimal fictionalization in my biopics.

The film did shine in two places and I’d like to look deeper at both of those. The first is the story it told. I was not familiar with the Holodomor and people I’ve spoken to since and asked about it were also unaware. My wife, after I explained it to her, asked why it wasn’t taught in school. It was, for those that are unaware, a genocide of ethnic Ukrainians executed by Stalin and others. They went so far as to turn away grain from other countries in order to keep up appearances, all while letting between 3 and 10 million people die. The genocide was covered up, in part, by the New York Times who had Pulitzer Prize winning journalist Walter Duranty stationed in Moscow. Sadly, to this date, there are still countries that do not acknowledge this situation as a genocide. If not for the work of Jones, it’s possible that we would never have known about the genocide.

This story is interesting to learn, even if it is through the lens of film. I spent a lot of time during the movie simply reading articles related to Jones, Orwell, and the Holodomor. While it is very disturbing, it’s surprising that we did not learn about this in school and that it is not discussed more frequently. So, if you can stick out the slow pacing of the film, you will learn a thing or two and discover that Gareth Jones was actually a fascinating individual.

The second thing I found interesting about the movie was the cinematography. I tend to call out bad camera work, but I seldom acknowledge good work… when it’s good, it just becomes part of the film and doesn’t stand out. In Mr. Jones, the cinematography goes far beyond the camera work and you can see the time and effort put into thinking about the shots. Unlike your typical Michael Bay action film where it’s all about blurry motion, this film was thoughtfully done. The movie transitions from colour to black and white for scenes that are more depressing. I really appreciated this and it created a real sense of despair, it evoked a lot more emotion. Similarly, much of the film was shot via windows, glass, and  mirrors. It created really cool shots and was done in a way that fit well with the movie, but also stood out as memorable. I appreciated the effort that went into making all those shots work.

At the end of the day, the film is interesting and informative, as well as bleak and depressing. If you can handle a slow paced movie, I think it is worth checking out. Mr. Jones will be available On Digital June 19th and On Demand July 3rd. 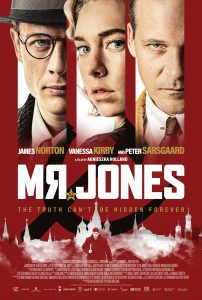 Movie description: Agnieszka Holland’s thriller, set on the eve of WWII, sees Hitler’s rise to power and Stalin’s Soviet propaganda machine pushing their “utopia” to the Western world. Meanwhile an ambitious young journalist, Gareth Jones (Norton) travels to Moscow to uncover the truth behind the propaganda, but then gets a tip that could expose an international conspiracy, one that could cost him and his informant their lives. Jones goes on a life-or-death journey to uncover the truth behind the façade that would later inspire George Orwell’s seminal book Animal Farm.

I love a good western. It’s just a classic genre of film that makes me think of my dad. If not for him, I probably never would have seen a western and I likely wouldn’t […]