Here’s the problem. I’m not sure that Initiation has a genre. From the trailer, it is clearly wants to be a slasher flick. On IMDB, it is listed as Crime, Horror, Mystery. So, what is Initiation? It’s a film on the cusp of being a horror flick. It lacks the music and the tension to be a good slasher flick, although those two really go hand-in-hand. You need the music and the cinematography to work together to create the tension. You also need the surprise. I don’t necessarily mean jump scares, they are a cheap way to achieve the goal. I mean the unexpected. When I watch a slasher flick, the last thing I want to do is be able to snap my fingers as the killer appears on screen, yet, with this film, I could. It was entirely predictable.

I’m sure, by now, you’re wondering what the plot of the film is. It’s relatively simple actually. University students are awful. It’s really that simple, everyone is awful to someone else with limited exceptions. The guys bully their hook-ups by posting a single exclamation point on the women’s social media. This is nothing new, frats have been awful in films forever. However, this time, the female lead is just as bad as her male counterparts. When one of her friends is raped, rather than reporting it, she investigates it herself because she’s worried that her brother was involved. This is when the killings start and the writers try to make everyone look like a suspect, but they try too hard. In fact, not a single male character has any redeeming qualities in the film, they’re all just, to put it bluntly, pieces of shit. I guess the easiest way to look at it is that every character, except our victim, is highly flawed. The rule is that when almost every character looks like they could be responsible, it usually isn’t any of them, which makes things more obvious than they should be.

So, why even give it 2-stars? Well, when I started, I gave it 2.5-stars, but as I thought about the film, I actually downgraded it. The best part of the film? That they managed to get Jon Huertas (This is Us, Castle, Generation Kill) onboard. I’m a huge fan of his work and it was great to see him on screen. Other than that, I did appreciate the look and feel of the killer. It was a little over the top and reminded me of some of the more famous slasher flicks, which is why I wasn’t surprised to learn that the first slasher the director watched was Scream. Additionally, I thought the story had merit. It was a little heavy handed at times, and failed to develop the tension that I previously mentioned was missing, but there was potential.

The experience I’m trying to most communicate with Initiation is an enjoyable and hyper-realistic ride that pays homage to the movies I was inspired by but with a modern take for today’s generation. We even constructed every detail of the killer’s mask to fit in the realm of genre- referencing with a new twist. The movie is important because it challenges consistent horror themes of misogyny, family, sex, and death by taking these genre standards and turning them upside-down with characters and a story we’re sucked into and care about. Initiation is about truth, power, the ability to change, and how deeply important sisterhood is for life’s challenging moments. Making this movie was a seven year journey and every stage of the process has shaped it. We only get to tell this story once, so I wanted it to be an internal and external ride for a big audience that’s terrifying, progressive, and original. Something that deeply connects and inspires people the same way I was 20 years ago.

Berardo really confused me with his director’s notes. I’m not sure how much of this movie was hyper-realistic and, other than the killer’s outfit, I’m not certain it pays homage to any previous films. I understand how Berardo thinks that they challenged the themes of misogyny, family, sex, and death in this film, but I don’t think they did. Nothing felt challenged, instead it felt forced and uncertain. At the same time, how can the film be about ‘truth, power, the ability to change, and how deeply important sisterhood is’ when the truth never really comes out, nobody had power, nobody changes, and the “sisterhood” is, once again, one friend fearful to report a crime because it may involve her brother. That said, the killer does bring the women together in the end, so I guess there’s that.

I know that I’ve been pretty critical of the film, and I did give it a low rating… but I still think this could be a Friday night popcorn flick for some. If this were picked up by a service like Shudder, I think it would find an audience with die hard slasher fans who want to watch anything related to the category. After all, I think this could have been a great film and I think the writers could have gotten their intended message across if they hadn’t written the characters to be so one-dimensional. The script for this film had merit, with a few touch-ups, a bit of character development, and a little less predictability, it could have been really good. With the addition of better cuts, fewer indicators that the killer was about to appear, and better music, the film itself could have been good.

Honestly, this was a painful review for me to write because I wanted to like it. The trailer made it look so good. The concept was there. It was just the execution that was flawed. For that reason, I do recommend that slasher fans still check the film out, I just don’t recommend paying for it… wait until it ends up on a streaming service.

Initiation was released on May 7. 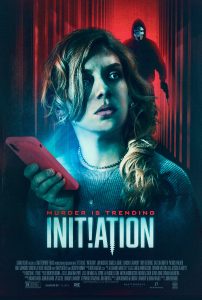 Movie description: In INITIATION, during a university’s pledge week, the carefree partying turns deadly serious when a star athlete is found impaled in his dorm. The murder ignites a spree of sinister social-media messages, sweeping the students and police into a race against time to uncover the truth behind the school’s dark secrets…and the horrifying meaning of a recurring symbol: a single exclamation mark.