Death of Me is a movie. There’s no denying that. It is not, however, a good movie.

Before I dive into what is wrong with the film, let’s talk about what is right and before we do that, let’s talk about the plot of the film. A couple, Neil (Luke Hemsworth) and Christine (Maggie Q), visit a small island off the coast of Thailand. They wake up and have no memory of the previous night, but their room is trashed and they’re in pretty rough shape. They realize they are late for their ferry off the island and rush to make the boat as the newscaster tells us in the background that a typhoon is approaching. They are unable to catch their ferry (their passports are missing) and they return to the Airbnb where they were staying to figure out what to do next. While there, they discover a video on Neil’s phone that shows him violently murdering Christine, which causes them to question what happened. From here, things go crazy, as they search for answers and you are never quite sure what is real and what isn’t. The horror elements are weak and repetitive. While it was enough to drive my wife from the room, it was simply because she is squeamish and was tired of seeing the same scenes over and over again. Ultimately, you have a weak story combined with weak horror elements… it just doesn’t work. At the same time… it’s not bad, it’s just not good.

What is good is Maggie Q’s performance. She’s a rock star in everything she’s in, so that’s not surprising. Her performance is why the movie wasn’t bad. I’ve been a fan of hers for years and I feel like this movie really put a spotlight on why she’s so good. She took a bad script and made it not awful. Her fear seemed genuine, her responses were realistic. She did a great job and Luke Hemsworth supported her, as did the rest of the cast. The movie is really the Maggie Q show with the Christine character as the only important and interesting character. The rest of the cast did a great job of propping her up and really letting her shine, unfortunately no one else was given any real material to work with and while many members of the cast did a great job of supporting the Christine character, they did not excel at supporting themselves.

I think a large part of that is the script. Death of Me was written by three inexperienced writers. None of them have much experience and even those with experience really haven’t written in nearly two decades. The dialogue wasn’t great and the character development was even worse. The horror elements relied entirely on overused concepts that stop being scary about the time you enter high school. There was also a strange decision to make half the dialogue Thai without subtitles. I suppose they wanted us to share in the main characters confusion, but you can only listen to a language you don’t speak for so long because you start to lose interest. They also telegraphed the conclusion of the movie with almost every line of dialogue. So many of the characters said things that pointed toward the ending that there was absolutely no suspense. I will say that the music did a good job of attempting to create suspense and I rather enjoyed the soundtrack to this film, but it was undermined by the dialogue every step of the way. 20 minutes into the film, I paused it and told my wife how it would end… there was no mystery.

If you’re a Maggie Q fan, I suspect this film is still worth watching. Also, if you have a preteen at home that’s been asking to watch their first horror movie and you’re ok with them seeing violence and gore, this might be a good option. Otherwise, this movie is best saved for streaming at the start of a horror movie marathon when people are still arriving and you want to save the good movies for later in the night.

Death of Me is available in theatres, on demand and digital October 2. 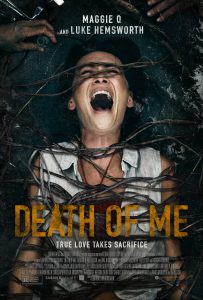 Movie title: Death of Me

Movie description: Vacationing on an island off the coast of Thailand, Christine (Maggie Q) and Neil Oliver (Luke Hemsworth) awake hungover and with no memory of the previous night. They find footage on Neil’s camera, and watch, horrified, as Neil appears to murder Christine. With twenty-four hours until the next ferry and a typhoon threatening the island, Christine and Neil attempt to reconstruct the night’s events—and are snared in a web of mystery, black magic, and murder.