While I love a good slasher flick, I usually struggle with supernatural and psychological horror. I can still watch psychological horror, but I don’t enjoy it the way I do slasher flicks and supernatural horror generally terrifies me. So, reviewing The Cellar was quite the undertaking for me. However, it starred both Elisha Cuthbert and Eoin Macken, two actors that I enjoy watching, so I figured I’d give it a shot.

I found myself quite surprised. Yes, I was terrified and on the edge of my seat, but the film was actually good. I say actually because when I’ve watched this type of film in the past, I find that the scare comes first and the story is secondary (and usually not great). With The Cellar, I was actually interested in the story and excited to see where it went. The film is incredibly creepy and I’m sure writer/director, Brendan Muldowney, deserves a lot of credit for that. I think, however, the performances given by the actors playing Cuthbert and Macken’s children, Abby Fitz and Dylan Fitzmaurice Brady, really completed the film and helped build the suspense and the creepy atmosphere. Really, the entire cast was incredible.

Interestingly, my wife, who does not watch horror films but came into the room a few times while I was watching the movie, noticed immediately that Steven Woods (Dylan Fitzmaurice Brady) was playing Super Mario Bros. 35 in one of the scenes. This game was only available from October 1, 2020 until April 1, 2021, providing a bit of insight into the actually filming window for casual movie viewers that are not inclined to look up exactly when the movie was filmed. For those wondering pre-production and principal photography happened between October and December 2020.

So, what is the film about? In The Cellar, parents Keira (Cuthbert) and Brian (Macken) purchase an old mansion in the country at auction in order to move their kids Ellie (Fitz) and Steven Woods (Brady) out of the city and give them a better life. Yes, that is 100% foreshadowing what is to come. Perhaps that is a lesson to parents… you might think you are giving your kids a better life when you are, in reality, damning them to endless horrors. The house itself is creepy, the music selected for the opening scenes is creepy, everything about the film has a very creepy vibe, but you want to keep watching and see what happens.

Unexplained things happen in the house and the Woods’ daughter goes missing. As the family searches for her, things keep happening that simply can’t be explained and we spiral deeper and deeper into the horror theme of the film. I don’t want to spoil any of the interesting elements that were added to the film, so I want to be deliberately vague here, but I will add that I loved the way that symbols and alchemy were used and that a professor was brought in to discuss what was happening and try to give the supernatural horror a more scientific feel. I thought that was very creative and clever and actually increased my interest in the film.

This is one of the best horror films I’ve seen with supernatural elements, or at least one of the ones that I’ve enjoyed the most. Where it fell apart for me and really the only thing that prevented me from giving the film 5-stars was the ending. I didn’t want the film to end the way that it did and saw a dozen endings that I would have preferred. While I’m not going to spoil it, if you find yourself watching the film, reach out on social media, I’d love to discuss your thoughts on the ending and share how I would have preferred to see the film conclude.

The Cellar is available on Shudder. 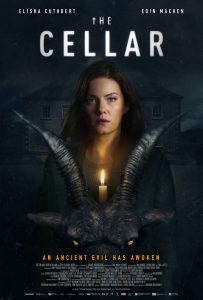 Movie description: THE CELLAR tells the story of Keira Woods (Cuthbert), whose daughter mysteriously vanishes in the cellar of their new house in the country. Keira soon discovers there is an ancient and powerful entity controlling their home that she will have to face or risk losing her family’s souls forever