When my wife and I watched the trailer for this film, we both immediately said the same thing, it looks like an R-rated version of Home Alone. My wife decided she didn’t want to watch it, but it was right up my alley. I was even more intrigued when I read the Directors’ Statement and saw that their description of Becky matched my initial impressions, “Becky is a twisted coming of age film, an ultra-violent Home Alone, featuring a 13-year-old girl channeling her teen angst to kick some serious ass…”

Let’s take a moment to talk about the casting of this film before we dig into it. There are a few of my favourite actors in this film, but before we talk about them, we need to talk about Lulu Wilson who plays Becky. She does an amazing job in every scene and absolutely owns them, commanding the screen in a way that we seldom see from young actors. Beyond the words she speaks, her facial expressions tell so much of the story and she’s an absolute joy to watch on the screen. She’s also supported by a phenomenal cast with Kevin James, Amanda Brugel, Joel McHale, and Robert Maillet. Kevin James is a favourite comedic actor of so many, but here he steps outside that role to play a neo-Nazi and the change makes him almost unrecognizable. He goes from his usual clean shaven appearance to a bald, heavily tattooed, bearded man. Becky’s father is played by Joel McHale and his fiance is played by Amanda Brugel. McHale is instantly recognizable as Jeff Winger from Community while Brugel plays Pastor Nina on the best sitcom currently in production, Kim’s Convenience. So many very funny people in such a serious film is shocking, not quite as shocking as the film, but close. It is, however, an amazing cast and they act so well together. Finally, you have Robert Maillet, better known to some as wrestler, Kurrgan. He is the perfect henchman for James and has a very interesting personal story arc.

The film itself is well put together. The story is interesting and creepy, the actions of our criminals are heinous, but, then again, so are the actions of young Becky. The film finds a 13 year old girl fighting four escaped convicts, but the setup is important. The film introduces us to Becky, who has recently lost her mother and is angry at the world, taking it out on her father. He takes her up to their family lake house, which she thought they were selling and brings her a moment of happiness by telling her they aren’t selling it. Then he introducing more anger when he informs her that he is engaged. As the new family-to-be is settling in to their first night on the lake, four convicts show up and things get messy. Becky is ultimately left to fight on her own against these neo-Nazis in an effort to save her own life and she’ll stop at nothing to accomplish that goal.

The cinematography, the music, the dialogue… everything is perfectly paced to keep you on the edge of your seat. I loved every moment of it, it was better than I had expected in every way and I already had high expectations.

You can see Becky in theatres, drive-ins, on demand and digital on June 5. I would consider this film my #1 recommendation for the weekend. If you can live with a violent, gory ride… you’ll appreciate that you took the time to check this film out. 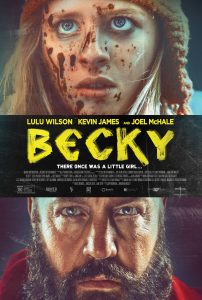 Movie description: Spunky and rebellious, Becky (Lulu Wilson) is brought to a weekend getaway at a lake house by her father Jeff (Joel McHale) in an effort to try to reconnect. The trip immediately takes a turn for the worse when a group of convicts on the run, led by the merciless Dominick (Kevin James), suddenly invade the lake house.