When Cooties first came out, back in 2015, I put it on my wishlist. Comedy Horror is a genre that I’ve always enjoyed, even when I’ve disliked pure Horror films, so this seemed to fit the bill. Having recently seen Bushwick, directed by the same team of Jonathan Milott and Cary Murnion, I decided it was time to give it a try. After all, the movie has a few big names attached to it – Elijah Wood (Clint), Rainn Wilson (Wade), Alison Pill (Lucy), and Jorge Garcia (Rick). After her performances in Goon (and Goon 2), The Newsroom, and Midnight in Paris (one of my all time favourite movies), I’ll watch anything with Alison Pill attached.

The movie follows Clint, a wannabe writer, as he subs for a sick teacher at a school in Fort Chicken that won’t allow teachers to bring their cell phones to class – this point will, of course, be important later. He has moved back in with his mom to focus on his writing and finds himself teaching at the school where an old high school friend, Lucy, also teaches. Due to contaminated chicken nuggets, anyone who has yet to undergo puberty turns into a zombie and the children quickly start to kill and devour any teachers they can catch. At this point, the movie transforms into your typical zombie survival movie with just enough of a concept twist to keep it interesting.

Rainn Wilson delivers the bulk of the movie’s comedy including calling Elijah Wood a hobbit and giving us classic lines like:

There’s not a lot to say, it’s about what you’d expect from this type of movie and it’s good for a few laughs. It’s not Shaun of the Dead funny, but it will keep you entertained. It’s the type of movie that you can put on while doing something else because you don’t need to pay close attention and you can still enjoy the movie. If anything, the movie underutilized Jorge Garcia, who does an awesome job as the crossing guard tripping on shrooms, but I would have liked to see him more actively involved with the core cast of the movie.

At the end of the day, there’s no reason not to watch this movie – except maybe better movies you’ve been wanting to see. I wouldn’t recommend buying it like I did, but it’s definitely worthy of adding to your watchlist if it shows up on your favourite streaming service. It’s a great rainy day movie. 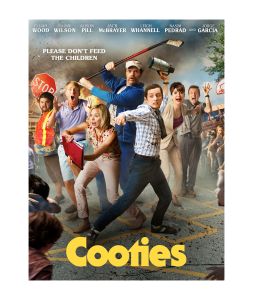 Movie description: From the twisted minds of Leigh Whannell (co-creator of Saw and Insidious) and Ian Brennan (co-creator of "Glee"), COOTIES is a horror comedy with unexpected laughs and unapologetic thrills. When a cafeteria food virus turns elementary school children into killer zombies, a group of misfit teachers must band together to escape the playground carnage.