When I saw the trailer for I Don’t Feel at Home in This World Anymore, I was excited. I added it to my Netflix queue immediately but I delayed watching it in favour of more interesting movies until about two weeks ago. After finishing the film, I asked where my time had gone and wondered how it had won the Grand Jury Prize at Sundance in 2017. I think that a Facebook post from shortly after finishing the movie sums it up, “It was different… I don’t think I’d watch it again nor do I recommend it, but it wasn’t awful… it had a few amusing scenes.”

Here we are, 10 days after watching it and I can’t think of any overly memorable scenes. It was one of those movies that served it’s purpose. It provided (some) entertainment and I didn’t turn it off. I will say that both Melanie Lynskey and Elijah Wood did phenomenal jobs in their roles, they did it, however, without any real support. Elijah Wood was the perfect creepy, oddball neighbour. The one where you cross the street, so you don’t have to use the sidewalk outside his home. He looked the part and his nunchucks and shuriken emphasized this. Lynskey also did a great job of looking frazzled and overwhelmed. The acting was definitely not the downfall of this story, the story was.

A couple of standout scenes include stolen lawn ornaments and a shuriken in the wall. The movie caused a few chuckles. I was also mildly surprised by a couple of gory scenes at the end of the movie, given the pacing, I did not see them coming. The film had all of the elements of a great movie, except for solid storytelling and that’s a pretty key element to find missing.

If you want to see how amazing actors handle a subpar script with a few great moments, that’s how I would best describe the movie and then it might be worth watching, otherwise I’m not sure that I’d bother watching this one.

I Don't Feel at Home in This World Anymore 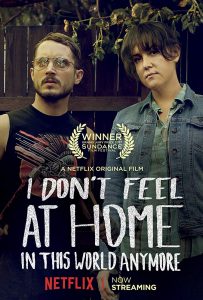 Movie title: I Don't Feel at Home in This World Anymore

Movie description: A nurse and her oddball neighbour resort to vigilante justice after her home is robbed, which takes them on a wild ride interacting with the group of criminals.

When Cooties first came out, back in 2015, I put it on my wishlist. Comedy Horror is a genre that I’ve always enjoyed, even when I’ve disliked pure Horror films, so this seemed to fit […]