Christmas with the Campbells had a special screening at the Just for Laughs Toronto festival with producers Vince Vaughn and Peter Billingsley giving a Q&A after the film. I had tickets and I missed it. I was devastated because the film combined so many of my favourite things – Christmas, Romantic Comedy, Vince Vaughn, Justin Long, Brittany Snow, George Wendt, and JoAnna Garcia Swisher. I was, however, delighted to finally be able to watch the film. I was completely surprised to learn that it included another one of my favourite film aspects – horrifically raunchy late-night comedy dialogue. I’m sure that you are trying to connect the dots here, so let’s just dive right into it.

Christmas with the Campbells has all the fixings to be a typical Hallmark style Christmas movie and I LOVE Hallmark Christmas movies. Take the premise – Man dumps woman, man’s parents invite woman to join them for Christmas because they consider her family and man won’t be there, woman shows up and man’s attractive cousin, who is the antithesis of man, is also there… I’m sure you can connect the dots from there. It differs in three ways that are worthy of discussion.

First, the casting. The typical Christmas RomCom consists of a TGIF star or two from the mid-90s and some faces you recognize with names that you’ve long forgotten. Christmas with the Campbells has an all-star cast – boyishly good looking Justin Long and the stunning Brittany Snow are our two leads, which is a fantastic pairing. Then you have JoAnna Garcia Swisher (who hasn’t had a crush on her in their life) and Alex Moffat (who was frequently called “SNL’s Handsome Guy” on social media) along for the ride. These types of movies are known for casting beautiful people, but here you have beautiful people who can act and are genuinely funny. Finally, you have the great George Wendt… I’m not even going to say anything else about him because, honestly, there’s nothing else to say.

Next, the writing. I think that it was the mix of writers on this that really made it shine. First, you have Barbara Kymlicka. You may not know her name, but if you’re a fan of made-for-TV Christmas films and check out her IMDB, you’ll probably find that you’ve seen several movies that she has written. She brings that authentic Christmas movie magic to the film and it really does have all those warm you from the bottom your toes to the tip of your nose type moments. I’m positive, looking at her film resume, that she’s the heart and soul of the film, the reason why this film is the same warm and comfy blanket paired with a hot cup of cocoa that every Christmas movie is. However, she didn’t work alone. Along with Kymlicka, we had Dan Lagana who has a much shorter resume, but it includes The Babysitter: Killer Queen, which was a fun movie. Finally, you have Vince Vaughn… a comedy legend who, I’m sure, is responsible for the third way that this film differs from your typical made-for-TV Christmas film.

The raunchiness. This film has all the raunchy goodness of a late night comedy. It is subtle at first and some of the comments in the open scenes are surprising, but you don’t really give them a second thought. As you dig deeper, however, and progress into the film, you realize that there are no limits and creating a late-night raunch-fest was one of the goals of the writers. It is, in my opinion, a resounding success. I love dirty jokes and raunchy movies as much as I love the typical cheese of a standard Hallmark Christmas movie. It was perfection in every way and I wouldn’t change a thing. It was, in my wife’s opinion, a little too much… but then again she married me, so we know she doesn’t make the best choices.

I loved everything about this film. It was a raunchy comedy, a magical Christmas RomCom, and a star-studded showing of master performances. This film will go on my annual Christmas re-watch list, it was that perfect. However, you should check it out and decide for yourself.

Christmas with the Campbells was released in theatres and on AMC+ on December 2.

Christmas with the Campbells 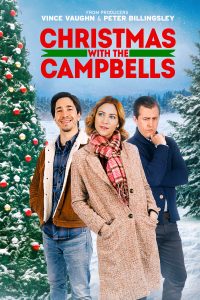 Movie title: Christmas with the Campbells

Movie description: The traditional holiday romance movie gets a little more fun this year with a spin from co-writers Vince Vaughn and Dan Lagana. In Christmas with The Campbells, when Jesse gets dumped right before the holidays by her boyfriend Shawn, his parents convince her to still spend Christmas with them, and Shawn’s handsome cousin, while Shawn is away.

Have you ever thought to yourself, “Hey, I bet Tusk is the oddest film that Justin Long will ever star in?” If you have, then you might want to sit down because House of Darkness is just […]