I’d wanted to see this one since it was first announced because I find the premise amusing (a town believes that Orson Welles’ War of the Worlds broadcast is real) and it had a decent roster of B-list celebrities. It was entertaining and had a few amusing scenes but I wouldn’t put it on my recommended list. The movie is advertised as a comedy but it struggles to be funny. It’s a difficult topic to do as a comedy because I suspect you would run the risk of becoming too “slapstick-y” but more humour would have improved this movie.

The movie has a large ensemble cast – after all, it involves an entire town – that detracts from the story. I understand wanting to tell multiple stories but that would have requires a 150 minute movie instead of the 90 minutes that this one had. The subplots involving the towns reverend and children could have become background items, relegated to a few brief minutes of screen time as part of setting the stage for the two interesting stories, one involving Tony Hale’s Clark Hill and the other involving Peg Prickett, played by Anna Camp. With a focus on these two story lines, the movie could have transitioned into romcom or even pure romance, leaving the radio broadcast as nothing more than a plot device for an interesting story.

If you’ve got nothing better to do on a Tuesday night, this movie would make decent filler but it’s not worth the time investment if you have anything better to do. They had so much room to create greatness and, in the end, you’re left wishing they had made it to mediocre. 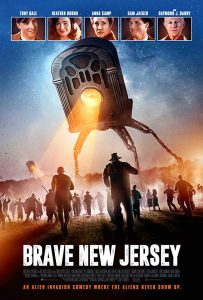 Movie description: A small town in New Jersey does not realize that Orson Welles' 1938 War of the Worlds broadcast is a radio show and not a real attack. The residents gather to defend the town and true feelings are revealed.

I love a good western. It’s just a classic genre of film that makes me think of my dad. If not for him, I probably never would have seen a western and I likely wouldn’t […]