When I think Horror Comedy, one name comes to mind first – Bruce Campbell. So, when I saw the trailer for Black Friday, I knew I had to watch it. This would, in some small way, make up for me recently missing BruceFest. The film also adds Devon Sawa and, if you were a teen in the 90s, it is hard not to know his name. You sort of grew up with him, from Little Giants, Casper, and Now and Then to SLC Punk, Idle Hands, Final Destination, and Eminem’s Stan, everywhere you looked, there was Sawa.  Campbell and Sawa together had me very interested in checking this film out.

The premise of the story is also amusing. It is essentially a zombie flick, but the zombies are created by aliens that land during a “meteor shower.” As the “meteors” hit the earth, shoppers are lining up for Black Friday sales and store employees are unhappily preparing for the rush. We find our band of heroes within one of the stores, a toy store where the staff preparing for Black Friday looks as happy as they would be if they were getting a root canal. I really love the analogy here, that Black Friday shoppers are just brainless zombies. After we get past the shopping jokes and into the full Zombie apocalypse, the movie chugs along like most horror comedies but with a bit of added holiday spirit.

I think that, for me, the cast was absolutely brilliant. I was a little disappointed that Bruce Campbell wasn’t in a more of a kick ass role, but I think he played it perfectly and seeing him in the role he has adds to the humour of the film. Devon Sawa was great in his role. He keeps popping up in films and TV shows here and there, but I wish that he’d do it more because he really is fantastic. The rest of the cast was great as well. Michael Jai White did a great job in his role and I loved the path his character took. Did it hit a few tropes? You bet, but a horror comedy should always be filled with classic tropes. Stephen Peck did a brilliant job making himself the most hated person on screen. When someone makes you actually root for the zombies to catch them, you know that they’ve done a great job. Finally, Ryan Lee and Ivana Baquero both deserve standing ovations for their performances. They both look incredibly familiar and they’ve both had roles in things I’ve seen, but I don’t think I actually recognized them, I think they just looked familiar. Lee played a germaphobe, which makes for some hilarious moments when zombies are attacking. Baquero was just a lot of fun and was given a number of lines that hit at just the right moments.

At the end of the day, if you’re looking for a bit of holiday fun, then you probably want to check out Black Friday. Within the first 10 minutes of the film, I was already disappointed that I rented it instead of buying it. I have a feeling that this moving will become an annual Black Friday tradition.

Black Friday is available now to rent or purchase on digital and demand. 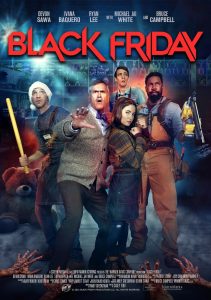 Movie description: On Thanksgiving night, a group of disgruntled toy store employees begrudgingly arrive for work to open the store at midnight for the busiest shopping day of the year. Meanwhile, an alien parasite crashes to Earth in a meteor. This group of misfits led by store manager Jonathan (Bruce Campbell) and longtime employee Ken (Devon Sawa) soon find them themselves battling against hordes of holiday shoppers who have been turned into monstrous creatures hellbent on a murderous rampage on Black Friday.

I loved the first part of this documentary trilogy. I wasn’t as impressed with the second part. It is still quite interesting and I learned about movies I hadn’t seen (and now want to see). […]