Finally, a movie that speaks to my heart. I know a lot of genres do – comedy, romcom, musicals – but mindless action flicks are what I grew up watching. If you grew up watching Stallone, Seagal, JCVD, or Arnie, then you know exactly what to expect out of this movie. A ridiculous story setup leads to our star being wronged and the only option, of course, is to kill everyone involved. The best thing about this type of movie is that it’s dead simple in structure and story. Everyone knows what to expect and how it’s going to end before the production companies’ logos even finish showing ahead of the movie.

One big swap about this movie is that the police officer husband dies and his wife is left to avenge him. She’s able to do this because she’s a former Army Ranger and I have to give Ellen Hollman credit because she is believable in this role. While there have been plenty of badass female action stars, they aren’t usually portrayed in the same way as their male counterparts. Hollman in Army of One could have been swapped with Stallone in First Blood or Seagal in Under Siege and the movies would have still played out perfectly. She was a gritty fighter who had all the same kills in many of the same ways and even made the same mistakes, but still prevailed.

The movie was great for the nostalgic feel while still being modern and it had all the cheesiness that makes these traditional action flicks awesome. There were, however, a few downsides that I feel I need to point out. The first is that the film was not without audio issues. At times, particularly when guns were fired or you had close-ups of people’s faces, the sound seemed to be just out of sync with the film. It isn’t a huge problem but it can be slightly annoying at times. As well, there’s one scene early on where it feels like it was cut in afterwards. The image quality is significantly degraded (almost like it wasn’t lit as well) and the audio quality is off. The scene happens and then everything is back to normal. The second is the bad acting from the bulk of the hillbillies in the film. It was almost comical to watch as the film would transition from the likes of Hollman and Passmore to a couple of rednecks or from Geraldine Singer to a group of her boys. They just couldn’t share the screen with the far more talented actors. I realize that a specific body type was required to fulfill those roles, but it was still disappointing. Fixing those issues would have made this a 4-star film.

I guess I haven’t really talked much about the film. So, let’s talk about the basic action movie plot of Army of One. A couple goes on a vacation in a quiet country area populated by rednecks galore. They do something stupid and stumble onto something they shouldn’t see. Things go badly and suddenly only one half of the couple is able to retaliate, so they do and they do so by killing everyone involved. As I said, it’s a pretty typical action movie plot, but one that is portrayed really well and all of the action sequences are top notch and really fun to watch. This isn’t a Fast and Furious, John Wick, or Mission Impossible film… this is just a simply old school action movie with a lot of action and a decent story. You should definitely check it out.

Army of One was available on DVD and Digital December 15 from Uncork’d Entertainment. 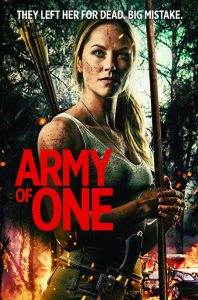 Movie title: Army of One

Movie description: Out hiking, Special Forces Brenner Baker and her husband stumble upon an illegal drug compound. The drug dealers capture them, kill her husband, and leave her for dead. They should have made sure they finished the job. Now, 1st Lieutenant Brenner Baker of the Army's 75th Ranger Division is on a one-woman killing mission carving up everyone in her path until there is only one person standing, her.

Since it was Father’s Day, I called my dad tonight after finishing Murder Mystery. We discussed how it was a good film, but not a typical Adam Sandler comedy. I went into it expecting the […]