I will always be able to tell you exactly where I was when I learned that Robin Williams had passed away. On August 11, 2014, my wife was out of town visiting family and I was sitting on my couch drunk. If my movie reviews haven’t made it obvious, I wear my emotions on my sleeve and I don’t remember the death of a celebrity impacting me before, but the death of Williams hit me hard. I drank a 26er of whiskey (a fifth for Americans) and cried all night. I’m not sure if it was just his passing or if it was the silence of being alone in the apartment knowing that just 96 days earlier my grandmother had passed away from Alzheimer’s. Either way, I was devastated that night and I’ll never forget it.

That memory is why I knew I had to see Robin’s Wish as soon as I possibly could. I couldn’t believe my luck when a review copy came into my email. I had to prepare myself for this film. I’ve had happy movies leave me in a puddle, so I expected the same from this film. I’m happy to report that the documentary was so well done, that I escaped with my emotions mostly intact. I had to wipe away tears more than once, but I wasn’t a blubbering mess. I credit the director with that one, Tyler Norwood put the film together in such a way that it swapped from emotional to clinical just enough to keep you on edge, but never push you all the way over.

In the end I think we’ve done the work of restoring a legacy that had been tainted by a fundamental misunderstanding. It was in the spirit of completing the record, and honoring Robin with giving the world the truth of what took him from us that I think this film shines, and can serve as a moment for the world to look deeper into this beautiful man’s story.

The documentary tells the story of Robin Williams’s final days. It looks at at the disease that was stealing his identity, Lewy Body Dementia (LBD) – a disease that he would never know, a name that he would never hear. It looks at the impact it had on his final performances, his relationship with family and friends, and the torment that he was experiencing. More than that, thought, I think it looks at the love between husband and wife and the commitment of Susan Schneider Williams to find out what happened to her husband.

In this 77-minute deep dive, you’ll hear stories from his friends, his family, his neighbours, and his doctors. You’ll dive intimately into his final days, weeks, and months. It is a hard watch. It’s painful to realize exactly what he was experiencing. At the same time, you see the way that he touched the lives of so many others, the impact that he had on them and it is, at times, uplifting.

Robin’s Wish is Robin’s story, it’s our story, and in some ways it’s a universal one — as we all understand what it means to search for answers, to experience love and loss and the power of healing that keeps us going.

This is a movie you need to see. A movie that everyone needs to see. As we watched the film, my wife questioned how she had never heard that Robin had LBD and about how it had impacted his life. That’s part of the reason why this film exists, to share the story, to make people aware. So many people heard about Robin’s death, heard the speculation, and then stopped listening. This film tells you the truth about what happened and explains it in a way that everyone can understand.

Finally, if you are watching the film and notice the plethora of beautiful artwork, it is the work of Robin’s wife, Susan. You can see more of her art on her website and I highly recommend looking at those beautiful pieces.

Robin’s Wish will be available on Demand and Digital on September 1, 2020. 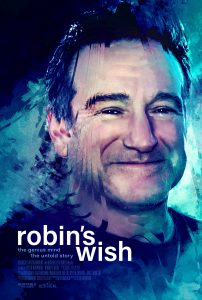 Movie description: Robin’s Wish tells the powerful true story of actor/comedian Robin Williams’ final days. For the first time, Robin’s fight against a deadly neurodegenerative disorder, known as Lewy Body Dementia, is shown in stunning detail. Through a gripping journalistic lens, this incredible story sheds an entirely new light on the tragedy, beauty and power behind the mind of one of the greatest entertainers of all time.