In the past few weeks, I’ve been asked to review so many horror movies that I’ve lost count. It is, after all, that time of year. That means that something needs to catch my eye in order for me to actually sit down and watch it. Trick had enough going for it that I decided to check it out. First off, it stars Omar Epps. I loved him as Eric Foreman in House and Isaac Johnson in Shooter, I was actually surprised to see he was starring in a horror film. Additionally, the cast included Jamie Kennedy, who played Randy Meeks in Scream and Scream 2. With that cast, I was sold and jumped into the movie.

The film reminded me of Scream as I sat and watched it, so I wasn’t surprised to see that the director’s statement included the following statement:

Having edited the original SCREAM trilogy and cut for Wes Craven for more than 20 years, I wanted to explore a call back to the genre that was both nostalgic but also broke new ground of mayhem and mystery.

You have Jamie Kennedy, someone who worked on the original Scream trilogy, and, if you look at Omar Epps’s IMDB page, you’ll see a Scream 2 credit – so shouldn’t be a surprise that this film is Scream-esque. I think this was a good thing; I enjoyed the Scream films when they were released and I enjoyed this film just as much. After seeing the movie, I asked friends to tell me which horror movie had the best opening scene and several of them agreed that it was Scream’s iconic opening scene. I think, however, that Trick gives that film a run for its money. The opening scene is filled with teenagers partying, blood, and plenty of gore. I was quick surprised that we jumped into the action so quickly, but loved that the film took off running and didn’t slow down.

The opening scene finds Trick, pictured in the image above, attempting to slaughter a room full of teenagers at a Halloween party. After killing several, he is stopped with a fireplace poker to the gut and ends up taken to the hospital. Ultimately, he escapes the hospital, but is shot by Omar Epps’s character, Denver, in the process. While the world has written Trick off as dead, Denver believes he has survived and follows similar killings happening along the Hudson River. Epps isn’t the only star in this film and I need to call attention to Ellen Adair as Sheriff Jayne and Kristina Reyes as Cheryl Winston, both of whom did amazing jobs. I particularly enjoyed seeing Reyes on screen and look forward to seeing her again in the future, she was as captivating on screen as Epps was.

In short, I loved this film. I think everything about it – the gore, the story, the ending – was excellent. As far as horror films go, Trick has become one of my favourites. The film ended in such a way that the story could continue and I hope that it does, giving this film a sequel would be amazing. If you watch one film during the Halloween season, it should be this one. There are three or four moments where you’ll go ‘WTF!?!’ and the way the end of the film plays out will likely surprise you. I know this franchise has the potential to be the next Scream. See it in theatres and on digital and on demand on Friday, October 18 – you’ll do yourself a disservice if you don’t see it. 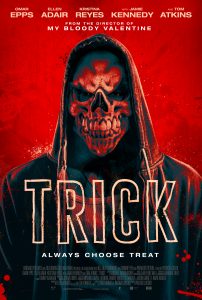 Movie description: On Halloween night in 2015, Patrick “Trick” Weaver massacred his classmates at a costume party. After being arrested, he managed to escape police custody, but not before being shot five times by Detective Mike Denver (Epps). Everyone believes Trick must be dead, but when a masked killer reappears the following Halloween, and every Halloween after that, they realize the nightmare is not over. With Trick wreaking havoc and killing innocent people in increasingly terrifying ways, Denver will stop at nothing to finish what he started and bring the carnage to an end.

Color Out of Space