Happy Cleaners is a family drama about a Korean family searching for the American Dream. While there are humorous points in the film, it is primarily a look at the struggles of the family. The parents, Mom (Hyang-hwa Lim) and Dad (Charles Ryu), own a dry cleaning business that is struggling to make ends meet and rely on their daughter, Hyunny (Yeena Sung), to help pay the bills. They intend for their son, Kevin (Yun Jeong), to go to university, but he has other plans and isn’t interested in the family’s traditional ways.

I really enjoyed the movie because, while it had all the traditional dramatic elements of film, it contained cultural elements and expectations that were very different from my own upbringing. One of my favourite parts of the greater diversity we see in films and television today is that I get to experience environments and situations that are foreign to me. This was the second film I watched in the past week that was a mix of two languages. This film featured Korean and English and I loved how the actors moved back and forth between the two languages, sometimes integrating them in a single sentence. It was a very unique viewing experience.

As I watched the film, it was hard not to feel bad for every member of the family. The grandmother takes on a job, the family loses their business, the mother and father are not happy together, Hyunny feels that she has to support her family, and Kevin feels like his family has him trapped and doesn’t understand him. There was one scene where the father looked absolutely destroyed from the words of his wife, it was heartbreaking to watch and Charles Ryu delivered so much emotion that it was one of the rare times when the action on screen made me feel uncomfortable. That might be my biggest take away from the film – that Charles Ryu, with almost no credits to his name, is phenomenal.

I also loved that although there’s a cultural divide, I found the film very relatable. I could feel the father’s pain and understand where he was coming from. I could understand the children pulling away from their mother. I could see Hyunny’s desire to take her relationship to the next level and understood why she felt obligated to support her family. Mostly, however, Kevin resonated with me. The desire to pull away, to differentiate himself, to be his own person… all the while bound in place by loyalty and love for his family.

I found myself on the edge of the seat – crushed when the characters were crushed and elated when they had a win. I was heartened by their interactions and devastated when they failed. At the end of the film, I just wanted to hug this family. If COVID wasn’t already reason enough to call your family and tell them that you love them, then this film will definitely push you over the edge. It’s laughter and anger. It is messy and chaotic. It is everything that you expect from a family that is so often hidden from film. It is a raw look at living rather than the polished turd that Hollywood so often tries to pass off as realistic. This is where I think the writers and co-directors, Julian Kim and Peter S. Lee, deserve so much credit. They created a masterpiece that everyone should watch. 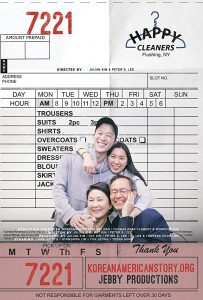 Movie description: A beautiful story of acceptance and reconciliation, the film tells the story of a Korean American family and their fight to save their dry cleaning business in Flushing, Queens NY. When the Choi family lose their dry cleaning business, they learn to love each other to survive the crisis and heartaches that they cause each other.

Paddleton is a new film from Netflix that premieres on February 22 staring Mark Duplass and Ray Romano. The film takes us through the twists and turns of two middle-aged single friends from the point […]

I’ve been debating how I would review TV shows. I’ve already reviewed a couple and I definitely enjoy talking about them, but I wasn’t sure if I wanted to do individual episodes, full seasons, or […]