Acting in genre films is sort of like being a vampire — You’re always up late, you often look great, and you spend a lot of time trying not to get caught. After 15 years of making fun/weird/cool movies, I had a kid. And, all of a sudden, this cinematic vampire had to be a dad. Blood Relatives is a story about growing up, even if you’re not growing old. It’s a horror movie with a heart. And blood. And a few guts. Sometimes our families suck, but at least they’re ours.

Conveniently, Blood Relatives showed up for review just as my dad was in town to visit. Since he was around, I made a rare exception and let him watch the screener with me. We grabbed snacks and settled in for the flick. As the film started, I gave the warning – “This looks low budget, I’m really not sure what to expect…”

The answer of what to expect, it turns out, was a fantastic horror comedy mixed with just a little bit of a coming of age story and a dash of road trip flick. At the end of the film, my wife (aka my editor), my dad, and I all agreed that was a great movie and an excellent way to spend 87 minutes. However, that take is probably not enough to convince you to go check out the film, so let’s talk about why you should check out Blood Relatives.

Let’s start with the quote I included above from the multi-talented writer, director, and star of the film, Noah Segan. The last two sentences of that quote really stood out to me. I said that the film was a bit of a coming of age story and that is an interesting aspect for film that explores the relationship between parent and child. It seems that when you’re a vampire who has been around for more than a century, you forget what it means to be human and have humanity in your life – particularly when that humanity comes in the form of family. Watching Francis (Segan) struggle with the idea of family and caring about someone other than himself was quite interesting, the character exhibits a lot of growth, giving us a look at vampires that we don’t typically see. At the same time, his daughter, Jane (Victoria Moroles) is a teenager coming to grips with life but also with her vampirism. The film explores how two people alone, without anyone to lean on and support them, come together, putting an interesting twist on the idea of parental estrangement. Watching Francis and Jane grow and adapt is very heart warming, which gives us, as Segan says, “a horror movie with a heart.”

The film was an absolute joy to watch as both Segan and Moroles are brilliant actors that transform completely into their characters. I was a little caught off guard when Segan first spoke, I was expecting a deeper, darker voice from the character, but we can’t change how we sound and I couldn’t imagine anyone other than Segan in this role. That being said, it was a great reminder to step back and reset expectations, I expected a menacing, disturbing vampire and instead I got a Yiddish man-child vampire fighting against parenthood and a frightened teenage vampire yearning for family and a place to belong. There’s actually something really special about that and the way that Segan and Moroles play off each other. There’s one scene in particular that is purely magical and it involves their interaction with a guard. I don’t want to spoil it, but it is hard not to smile as you watch Segan and Moroles interact. Then again, that is the case in every scene, the two work together so well.

If that doesn’t give you enough reason to check out the film, how about an easy one. If you’re a Shudder subscriber, then you can watch this Shudder Original quite easily. Since you’re already paying for the service, why not get a bit more out of it and watch a fantastic film. Plus, the film is only 87 minutes long, that’s shorter than some episodes of streaming shows these days, it seems like a no-brainer to make the time investment for something I’m certain that you’ll enjoy.

At the end of the day, Blood Relatives is just a fun, entertaining film that digs a lot deeper than a film like this has any right to do. It is clearly low budget as I pointed out before I started watching, but they squeeze every last cent out of every dollar of that budget with great acting, amazing chemistry between the leads, and an excellent script that makes you want to keep watching. 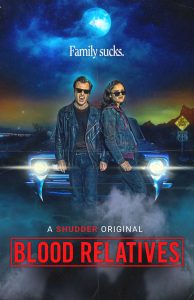 Movie description: Francis, a 115-year-old Yiddish vampire, still looks 35. He’s been roaming American backroads in his beat-up muscle car for decades, keeping to himself, and liking it that way. One day, Jane, a teenager, shows up. She says she’s his daughter, and she’s got the fangs to prove it. They go on the road, deciding whether to sink their teeth into family life.