Having said that, I enjoyed the film. I cringed a few times and had to look away at one scene, but I really enjoyed the film. It had a great story. The idea that this world famous assassin is targeted by his employer simply to avoid paying out his pension is genius. It’s not unlike the stories we here about big corporations laying off senior employees to avoid full pension payouts. So, while it was almost comic in concept (it is, of course, based on a webcomic and graphic novel by Victor Santos), it definitely had some real world undertones. The movie is also so far over the top that it’s unbelievable, part of the reason I think that the gore of the film works.

So, we have a former assassin who just wants to retire to the quiet life and, by all accounts, seems like a kind man (at least, outside of killing people for money). He makes charitable contributions, he helps his neighbours, he’s friendly. Throughout the movie, we get these weird flashbacks to an assassination he’s performed (or maybe multiple assassinations ) – to me they feel like his conscience regretting his past actions.

There are definitely a few laughs in the film, although you definitely need a dark, twisted sense of humour to find them. Mostly, the movie is a lot of action with some character development mixed in… and what a mix of characters we have. From the enemy assassins hunting our “hero” to his employer to the next door neighbour and Johnny Knoxville as Michael Green. Knoxville had a small cameo in the opening scene as a rather amusing character (another assassin working for the same employer and freshly retired). Richard Dreyfuss also makes an appearance, but his was less entertaining.

The real talk of the movie, however, should be the stars – Mads Mikkelsen as our assassin, Duncan Vizla, and Vanessa Hudgens as his neighbour, Camille. They both did an amazing job. Mads was born to play the role of the assassin. While I haven’t seen a lot of his work – I wasn’t a fan of Hannibal – I’ve always enjoyed his performances. I remember attending a SickKids Hospital brunch fundraiser where Mads was one of the celebrity guests. He told a story about the Casino Royale torture scene that I’ll never forget and every time I see him on screen, I remember that story. Vanessa Hudgens is an actress that I feel doesn’t get enough credit. She’s done a lot of great movies and she always does a phenomenal job. She also tends to take some odd roles and has done a great job of avoiding being typecast. In this role, before she speaks, I feel she’s nearly unrecognizable, they did a great job of making her fit the role with costuming and make-up, and her acting abilities take it the rest of the way.

I went back and forth with this film, unsure of how I would rate it. The gore definitely got to me at times. At the end of the day, it was a great film and it was the performances by both Mads and Vanessa, combined with the twist at the end that sealed the deal. If you can get past the torture scenes, this one is definitely worth the watch. 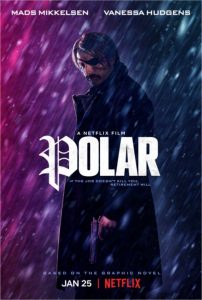 Movie description: The world’s top assassin, Duncan Vizla, aka The Black Kaiser, is settling into retirement when his former employer marks him as a liability to the firm. Against his will, he finds himself back in the game going head to head with an army of younger, faster, ruthless killers who will stop at nothing to have him silenced.