I’ve been a Joseph Gordon-Levitt fan every since 3rd Rock from the Sun. I’ve followed his film career relatively closely, so when I saw that he was the star of 7500, I knew that I had to see it. The movie did not disappoint. I will say right from the get go that you can skip this review and simply go watch the movie. However, if my opinion isn’t enough, let me tell you more about the film.

7500 tells the story of an airplane hijacking in a rather creative way. Typically, hijacking movies show you the cabin and they often include high levels of action as the plane is retaken. This movie takes place entirely in the cockpit of an Airbus A320. There are opening scenes following airport security cameras, but after that everything happens in the cockpit. The only view out of the cockpit is via windows or the tiny black and white video feed showing who is at the cockpit door. Patrick Vollrath, the director, deserves a lot of credit for shooting the story this way, I’m not sure I’ve seen an entire film shot in such a cramped space before and it really added to the sense of urgency. That urgency is part of what makes this thriller great. I spent the first hour of this 90-minute film sitting on the edge of my seat. The final third of the film definitely slows down, but the first hour feels very fast paced and gives the viewer anxiety, exactly as a good thriller should.

Gordon-Levitt plays the co-pilot on a flight from Germany to France and his significant other is a flight attendant on the same trip. During the flight, a hijacking attempt occurs, leaving Gordon-Levitt in a position of flying the plane and making a lot of choices that will weigh on his conscience for years to come. The performance he gives is emotional, gut-wrenching, and absolutely incredible. It is the Gordon-Levitt that I loved in movies like 500 Days of Summer and 50/50. It’s kind of odd that all my favourite Gordon-Levitt movies contain a 5 or a multiple of 5 (10 Things I Hate About You).

He’s not the only actor to be commended in this performance. The flights captain, played by Carlo Kitzlinger, does a phenomenal job in his role. I felt like he was a pilot, so it was not a surprise when I learned that he spent more than two decades piloting plans for Lufthansa. It was part of the reason that Vollrath wanted him for the role. Kitzlinger was also able to spend weeks coaching Gordon-Levitt to make him more believable as a pilot, including two weeks spent in flight simulators, including the ones used by Lufthansa pilots.

There’s a lot of routine that comes with being an airline pilot. We looked for actors who we could coach so they could really embrace that and learn it. But at the same time, I told the casting director to look for someone who was actually a pilot. And that happily came together.

Finally, the performance of one of the hijackers is worth pointing out. Omid Memar plays Vedat, the youngest of the hijackers. During the course of the film, he has quite the journey and you find yourself angry with him at times, but feeling sorry for him at other times. His performance is amazing and believable. That’s the key takeaway from all of the actors in this film, they gave very believable performances that made me feel like I was there.

I can say that it’s been a long time since a movie made me feel as anxious as this one did. I was on the edge of my seat, holding my breath, waiting to see what would happen next. The film definitely slowed in the final thirty minutes, but it continued to be interesting to see how it played out. 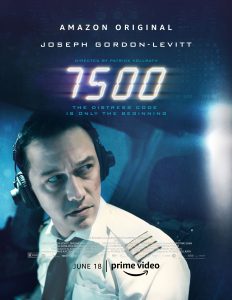 Movie description: It looks like a routine day at work for Tobias, a soft-spoken young American co-pilot on a flight from Berlin to Paris as he runs through the preflight checklist with Michael, the pilot, and chats with Gökce, his flight-attendant girlfriend. But shortly after takeoff, terrorists armed with makeshift knives suddenly storm the cockpit, seriously wounding Michael and slashing Tobias’ arm. Temporarily managing to fend off the attackers, a terrified Tobias contacts ground control to plan an emergency landing. But when the hijackers kill a passenger and threaten to murder more innocent people if he doesn’t let them back into the cockpit, this ordinary man faces an excruciating test.