When the first Mortal Engines trailer hit, I was excited. I asked my wife if we could see it in theatres, but I was overruled, as I usually am. However, for my birthday, I decided to buy it before it’s rental date on iTunes and finally watch it. It was my birthday present to myself. Apparently, I hate myself because it’s probably the worst birthday present I could have purchased. The super creepy voice over at the beginning of the film doesn’t fit with the rest of it, I’m not sure if the regular guy that was supposed to do it was out, but the voice over they used was awful. My wife made it less than 10 minutes into the movie then got up and said “This doesn’t make sense” and left the room. She had a point, they tossed you into the story and you really had to think about what was going on – they left out way too much background, expecting you to pick up some of the most basic points during the film rather than setting the stage themselves. I found myself taking frequent breaks. I wanted to finish the movie, after all, I’d paid for it, but I couldn’t do it in a single sitting… it was too bad. I did finish it though, I’m pretty proud of that.

The movie has exactly two redeeming qualities. The first is a single scene when a character dies. You get a particularly touching series of flashbacks that don’t seem to fit with the rest of the movie, but it’s still a great scene that would have been really well done in any number of other movies that aren’t Mortal Engines. The second redeeming quality is the visuals. These magnificent cities on wheels that fold up and move are an incredible sight. Similarly, the variation in the flying machines (it would be a stretch to call them airplanes) is awesome to see. I really enjoyed both of these but they were’t enough to save the movie for me.

I really wanted to like this movie. It was just poorly executed. The villain came across as laughable. While Hester is a great character and Hera Hilmar did a great job with her, Tom was a very weak character and incredibly unlikable. At one point, they’re rushing to save the lives of many and he delays them, instead admiring aviators jackets on a wall. The scene filled me with disgust and made me hate him even more at a time when I should have been cheering him on. Then there’s Shrike – can we say terminator rip off? The character was just odd. The story is that they are former people who had their memories wiped and were turned into mechanized assassins. Why use humans at all, what is the background for these molten metal killing machines?

If they were to redo this film and add in extra scenes, I would rewatch it… that’s how much I wanted to like it. They need to fill out the villain, they need to fill in the story gaps, they need to add more background. They could make it four hours long and I’d try it again. They just need to make it good because what I watched really wasn’t good.

At the end of the day, this simply wasn’t a good movie.There was some bad acting but mostly it was bad story telling. The story contains too many holes. My recommendation is to never watch this, unless you’re really bored, doing something else, and it is free on a streaming service,then, maybe, you could turn it on as background noise. 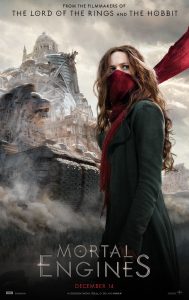 Movie description: Hundreds of years after civilization was destroyed by a cataclysmic event, a mysterious young woman, Hester Shaw (Hera Hilmar), emerges as the only one who can stop London — now a giant, predator city on wheels — from devouring everything in its path. Feral, and fiercely driven by the memory of her mother, Hester joins forces with Tom Natsworthy (Robert Sheehan), an outcast from London, along with Anna Fang (Jihae), a dangerous outlaw with a bounty on her head.