When you have a small review site and get a Twitter DM from the director of a film, it’s a big deal. I still get excited every time it happens – probably because it doesn’t happen that often. So, I was excited to sit down and watch Crisis Hotline after writer/director Mark Schwab reached out over Twitter to see if I’d be interested in reviewing the film. Branded an LGBT Thriller, I wasn’t sure what to expect, but I knew that Mark had to be a passionate creator since he was proactively reaching out for reviews.

There were two things that stood out to me about this film. The first was that this movie is a thriller. I feel like a lot of the time films are put into sub-genres (LGBT Thriller vs Thriller) when they aren’t good enough to stand on their own in the genre. This film definitely stands on its own. There were several times that I found myself on the edge of my seat, curious to know what would happen next. I normally try to avoid searching for films online, but, in this case, I wasn’t familiar with the cast, the director, or the movie, so I wanted to do a bit of research. I saw several mentions of this film being a horror-thriller. I disagree with that sentiment, I don’t know that the horror qualifier fits here. I would say, if anything, this movie is a psychological thriller. The second thing is that this movie is disturbing. It will likely leave you feeling uncomfortable and in need of a shower. I think that the viewer’s emotional response is probably best compared to Joel Schumacher’s 8MM, what you see play out on screen (and off) will shake you to your very core.

The movie begins with lines from Yeats’s poem The Second Coming:

The blood-dimmed tide is loosed, and everywhere
The ceremony of innocence is drowned;
The best lack all conviction, while the worst
Are full of passionate intensity.

This definitely foreshadows the characters that we come across in the movie. With that said, it’s probably worth talking about the movie since this is a review. The film centres around Danny (Christian Gabriel), a tech worker from Nebraska who meets Kyle (Pano Tsaklas) via a dating app after moving to the coast for work. Kyle works for Lance (August Browning) and Christian (Christopher Fung), managing websites for them. The backstory between these four men is told via a conversation with crisis hotline operator Simon (Corey Jackson). Simon gets a call from Danny, who claims he plans to kill himself and others. This is where the thriller kicks into gear as we wait on the outcome of the conversation. Will Simon talk Danny down? Will Danny harm himself and others? What brought him to this breaking point? I can say that I was honestly surprised by the ending.
The film did hit on one of my pet peeves, it contained what I call “tech lingo” and more and more films incorporate it as they tend to have these digital elements that reflect the modern world. The problem is that these films need a tech consultant and not just John who repairs PCs or Tim who claims to be an “IT consultant.” There’s a scene where Kyle is on the phone talking about setting up security for a service and, while the words may seem to make sense, they don’t. On an unrelated note, if any filmmaker or writer reads this and ever needs help in this area, I’m more than happy to help out – my day job involves cyber security, so I can help get the terminology right.
One thing that stood out to me about this film was a scene where Kyle and Danny are talking on the stairs. Kyle is talking about feeling trapped and the entire scene is shot through the wire mesh on the side of the staircase. While I appreciate cinematography, it seldom catches my eye the way this scene did. The shot feels like we’re seeing two prisoners in a cage, which fits the tone of Kyle’s feelings perfectly. I think this is one of the most memorable cinematic shots that I’ve seen in a film, I can close my eyes and see the shot perfectly in my mind.
I want to quote part of Schwab’s director’s statement, which I really think helps to frame this film:

As generations feel more and more disconnected from one another, it has become easier to give in to that desperate need to connect and ignore clear warning signs when the person you’ve just met might not have your best interests in mind. Especially when you are young and emotionally (and sexually) inexperienced.
It was these thoughts that helped me shape “Crisis Hotline” as a psychological LGBT/Thriller tackling the issues of suicide, sex, social media (and how relationships are created from it) and online exploitation, all wrapped up in a race-against-time thriller. I wanted to make a true genre film that still had a social point of view and dealt maturely and honestly with gay male sexuality and how challenging it is to form healthy love relationships in the age of online phone apps.

The end result of Mark’s script is a dark, disturbing film that keeps the viewer on the edge of their seat. While I didn’t experience the heart-pounding panic that a lot of thrillers induce, I always wanted to know what was coming and where the movie was going. The movie looks and feels like a true indie film and I worry that some people may look at it as “too low budget.” I know that sometimes people tend to overlook movies that don’t qualify as Hollywood blockbusters, but this film has a solid cast, a great (albeit disturbing) story, and awesome cinematography… it’s definitely worth checking out. Given Martin Scorsese’s recent comments that Marvel films aren’t real cinema, where he said, “It isn’t the cinema of human beings trying to convey emotional, psychological experiences to another human being”, I think that he would approve of this film. Personally, I think you can enjoy the latest MCU flick and also appreciate Crisis Hotline. Crisis Hotline is available on iTunes and Prime Video now. 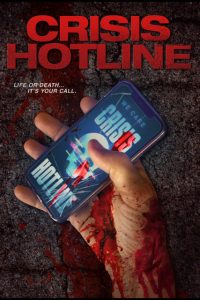 Movie description: The newest feature film from Diamond in the Rough is an LGBT thriller about a young man who calls a suicide hotline operator who threatens to kill three people before killing himself. We then flashback to the events leading up to the grim circumstances as the crisis center attempts to trace the caller and keep him on the line before he kills.