Somehow, I missed this movie growing up. I tweeted out during the first half of the film that I suspected my parents were just keeping me away from a bad movie. The film is only 79 minutes long but it feels like it takes forever to get up to speed, I frequently found myself checking the time. That said, the movie does pick up in the back half and does a decent job of redeeming itself. Originally, I thought this would be my first 1 star review.

The movie starts with a Star Wars-esque scroll followed by Van Helsing attempting to defeat Dracula and his monsters. He fails, creating the path that leads to our movie. The heroes of the story are a group of kids who hang out in a club house and are obsessed with monsters. At this point, it feels like a really weak version of The Goonies. The biggest name in the movie, Jason Hervey (Wayne Arnold of The Wonder Years), has only two small appearances. Although, to be fair, this was filmed before The Wonder Years. The small group of friends learn, via their “creepy” German neighbour (who turns out to be a concentration camp survivor) and a lost journal of Van Helsing’s purchased at a garage sale, that they need to find a small amulet and recite an incantation over it. The incantation can, of course, only be recited by a female virgin. The movie culminates with an epic battle scene and our rag tag band of monster enthusiasts saving the day.

As I mentioned, the movie picks up in the back half and we start to get some action. I wish that the introduction wasn’t slow played as much and the second half of the movie had more time to play out. It would have been a much better flick. One of the best scenes is the montage of the preparations for the battle, the scenes were nicely cut together and backed by great music. The film is, of course, filled with cheese… with a tag line like, “You know how to call when you have ghosts. But who do you call when you have monsters?” implied that from the get go. It was nice, however, to see the monsters handled so well. I enjoyed seeing Frankenstein’s Monster so clearly portrayed as a hero. Dracula was also well acted and I enjoyed the performance. Even Wolfman was great, it was easy to see how torn his human self was over the actions of his monster self. Gillman and the Mummy were underutilized but that was primarily because of how much time was wasted at the start of the movie. We could have had more of the monsters earlier on and the movie would have been better.

At the end of the day, the movie redeems itself and is campy enough to find a place alongside other classic 80’s movies. It will never been as good as The Goonies, The Princess Bride, Gremlins, or any other greats the 80’s gave us, but it is worth checking out simply for the amazing monster portrayals and a brief wave of nostalgia. 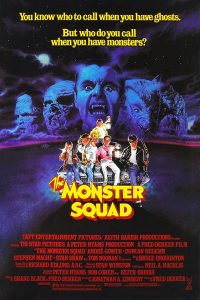 Movie description: A group of friends, obsessed with monsters, have to fight Count Dracula and a group of monsters in order to save their town.