Since it was first released, I’ve been fascinated with the film Man on the Moon and the films focus Andy Kaufman. The all star cast is topped with Jim Carrey in one of his greatest performances. The decision to produce the film with so many great actors reprising their roles was brilliant, as was giving people like George Shapiro and Bob Zmuda small bit roles. The portrays a man who might be a genius or might be insane. At times, it is difficult to tell. What I can’t explain is why I’m in awe of Mr. Kaufman.

I was two years old when Andy Kaufman died, it’s not like I grew up with the man who appeared on two of the funniest shows to come out of the 70s — Saturday Night Live and Taxi. Although I watched Jerry Lawler wrestle in the 90s, I was not around to see him fight Andy. I find him hilarious, I think he is the very definition of a provocateur. I’m sure I had seen the occasional episode of Taxi growing up, but it was Man on the Moon on VHS in 2000 that inspired me to find out more. I read everything I could about Andy Kaufman. I was amazed by the legend that he had faked his own death and may be out there somewhere, laughing at us as his final joke continued to play out. So, you can imagine my dismay when I learned recently, that my wife had never seen the movie. A quick press of the Buy button on iTunes and we were watching the film.

While Kaufman is interesting and the story telling is solid, it is Jim Carrey who makes this movie worth watching. This was not Dumb and Dumber, Ace Venture, The Mask, The Cable Guy, or any of those typical “stupid funny” (as my wife likes to call them) movies. This was a serious movie showing the rise and fall of a man who alienated nearly everyone around him. Sure, it’s a comedy and Andy Kaufman was made people laugh, but this move was a deeper look at the man and the world in which he lived. I’m not sure there’s another actor alive that could have portrayed Kaufman and slid so easily between characters and personas. From Foreign Man/Latka to Tony Clifton, whether reading Great Gatsby or lip syncing along with Mighty Mouse, Carrey mastered all of it and delivered an incredible performance. There’s a reason he won the Golden Globe for Best Lead Actor in a Motion Picture – Comedy or Musical that year (in addition to nominations for a SAG award, MTV Movie Award, and others). Jim Carrey is, of course, supported by an amazing cast including Danny DeVito, Paul Giamatti, and Courtney Love, all of whom do a stellar job.

The movie ended, with my wife calling it “different”. She was not a fan, however she had a theory. She figured that I found Andy Kaufman amusing because my sense of humour and many of the things I do so closely resembled him. She felt so strongly about this, that she called my mom to see if my style of humour developed around the time that I first saw Man on the Moon. If you a fan of Carrey, comedy, Kaufman, or biopics, this is a movie worth seeing. Although, it’s nearly two decades old, why haven’t you seen it yet?

Man on the Moon 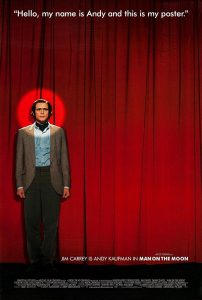 Movie title: Man on the Moon

Movie description: A biopic of the life of Andy Kaufman.